Condo Wall Studs types – Can I hang a tv on my razor thin condo walls?

Home/TV and Home Entertainment Installation/Condo Wall Studs types – Can I hang a tv on my razor thin condo walls?

Condo Wall Studs types – Can I hang a tv on my razor thin condo walls?

Can I mount my TV on a thin condo wall?

Firstly we have to understand the three kind of walls that you will find in a condo.

I am referring to walls that have a layer of drywall on it.  If it is a concrete wall it’s pretty straight forward and you would know this by looking at it. The surface will be grey just like any concrete flooring.

A. Most internal wall (walls within your condo unit) wall thickness are 3 inches with 2 “ metal studs with 1/2 drywall on  both sides of the metal studs . This is the wall type that I am going to help you with and the only TV wall  mount that will work with this kind of wall is made by Condomounts.

You can either mount your TV directly on the drywall or go through the metal studs. The Elephant toggle drywall/plasterboard anchors provided in this kit are rated for 200lbs each. You have to use 4 of them to have a secure install. It’s very safe to Mount your tv just on drywall using a fixed tv mount or tilt Tv mount. If you are planning to use a Tv mount with an Arm then you have the go through the metal stud and the same 200lbs anchors can be used but you will need to identify the  steel/metal stud and drill through it to insert the anchors.

C. The other type of wall is the double layer drywall. This type of wall is always between your your unit and your neighbors or an outside wall. To mount TV s on this wall you can use the condomounts metal stud mounts or steel stud mounting kit bit you might need longer screws.

Why do I have Metal/Steel Studs?

Do you live in a condo or work in an office and want to mount your TV to the wall?

You are 90% going to be working with metal studs, don’t get discouraged. These types of buildings usually have metal studs for many good reasons. E.g Wood Studs are less a fire hazard then metal studs. Metal studs are also easier to tear down and cheaper to build partitions with.  Imagine those tall large office buildings with lots of woods. It could be a disaster when it catches on fire.

Can I mount a TV on a Metal/Steel stud Wall without Professional tools?

It is very possible to mount a television to metal studs yourself, as you do it properly and have the right anchors. We recommend the Elephant anchors which is a variation of a toggle bolt.

Look at the zoom circle in this picture and think about how these anchors got to where they are. You can choose to either to mount directly to the drywall using or through the metal studs. Clarification is provided in the steps below. 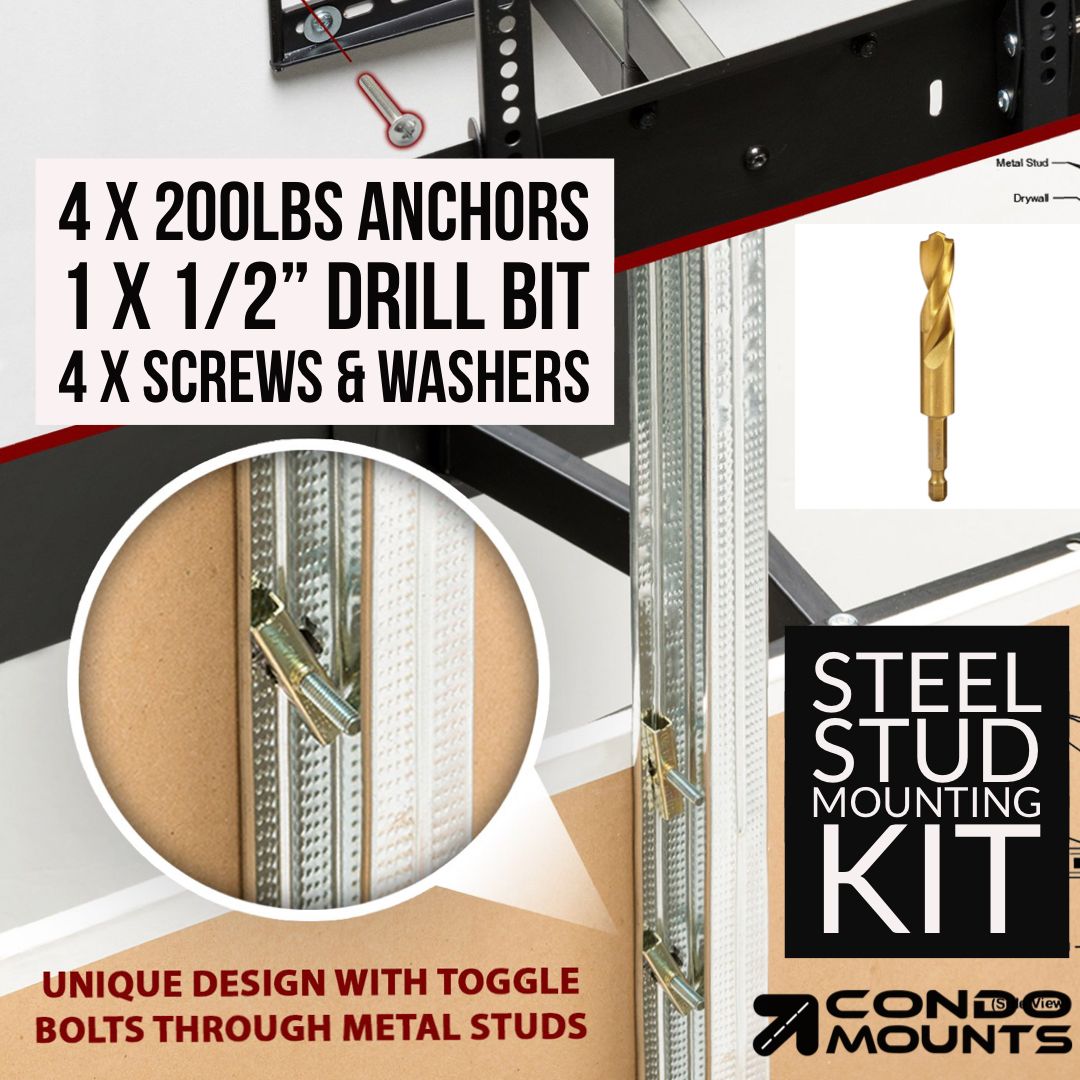 We’ve put together a step-by-step guide to help you mount your TV with metal studs and to give you the confidence that your television won’t fall off the wall.

If you are doing it once it is worth to buy the Condomounts Mounting Kit. The reason being it comes with a drill bit, anchors and screws. If you buy them separately they cost more. Take a close look at the the drill bit supplied, it is titanium coated(last longer) and has a pilot head that cuts through metal faster. If you are a contractor/tv mounting professional its worth to buy the 50pack+screws+drill bit.

If you dont have a TV Mount and Want to buy one with the kit included then you can get this.

If you already have an existing TV mount you can purchased the Condomounts Metal/Steel stud Mounting Kit instead of the entire mount. Or you can just purchase a big box of 50 Elephant anchors.

The type of anchors you need is an anchor that created a nut kind mechanism behind the wall. These anchors are called toggle bolts. There any many variations you can get as toggle bolts but some of them are just to hard to work with. The type you want to get is the Elephant anchors, These are the improved version of the toggle bolts and are 5 times faster to install then the original toggle bolts. Below is the picture. Step 2. Mark the position of your TV.

Use painters tape and mark borders based on the size of your TV. This will give you a visual idea of the height of your tv and whether you are comfortable with the positioning when viewing from your couch or bed. Please see this video which explains more about the perfect height for your TV. how to position your tv before mounting on metal studs walls

Use a magnetic stud finder or any stud finder you have to mark the position of the studs. Step 4. Determine whether you want mount on the stud or just the drywall. (mount to 4 mounting points on your wall)

Depending on the TV mount you have and the weight of your TV decide whether you want to mount on the stud or on the drywall. These anchors work in both scenarios.

If you have a tilt or fixed mount, which are TV mounts WITHOUT an arm, you can skip the studs and mount directly on the drywall.

To be extra safe you can you can mount to one metal stud instead of two metal studs.

Mount with Arm (mount through metal studs is a MUST)

As a rule of thumb, we would suggest that if you are mounting anything above  60lbs mount at least one point into the metal stud. Step 5. Mark the position of the wall mount

Based on the positioning of your TV as marked with your tape. hold the tv mounting plate to the wall and mark the holes.

Use a 1/2″ drill bit for the elephant anchors or any other toggle bolt you have. How to mount Tv on Metal Stud with detailed X-RAY view of Metals Studs.

How to Drill holes through Metal or steel Stud

How to remove toggle bolt, snaptoggle, toggler anchors from wall