All routers are not equal. Getting a great router means the difference between a crashy home network with terrible range and a rock-solid Wi-Fi connection with a range of 200+ feet. For example, in a CNET benchmark the ASUS RT-N66u was able to maintain transfer speeds of 98 megabits per second at a range of 100 feet, while its nearest competitor, the Cisco Linksys E4200v2, fell to a mere 35 Mbps at the same distance. And the Cisco is actually a decent router; cheaper ones in the $50 range can have around ½ to ⅓ the speed and range, based on the various tests that hardcore reviewers have conducted. This matters for network traffic between computers more than it does Internet access, which is slower than the maximum throughput of most routers. But at the outer fringes of your range, it is going to matter. 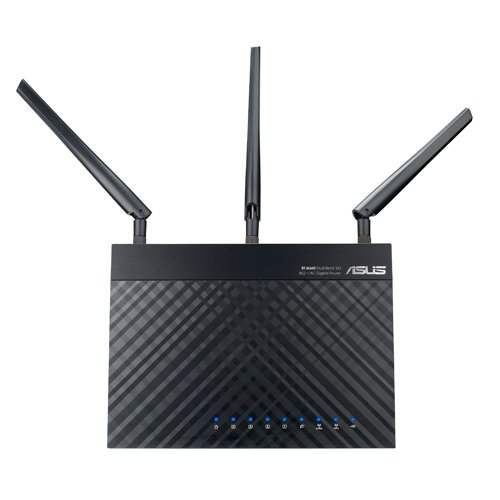 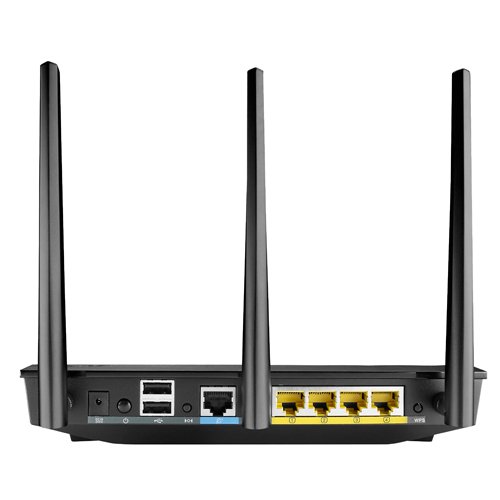 In addition to range, here are the most important things to look for in a modern Wi-Fi router: stability, speed and user interface. Stability ensures the router can handle heavy use from multiple devices—say, one person surfing the web, another streaming an HD movie from Netflix and yet another playing a video game online.

All modern routers support 802.11n Wi-Fi, but only some routers support the fastest specification of that standard (commonly labeled N900). That speed is useful for transferring big files like HD movies or backups across your wireless network. A smart user interface ensures that tweaking security settings and other options is as easy as possible.

The ASUS RT-N66u, also known as the “Dark Knight” (and we wouldn’t make that up) is a dual-band N900 gigabit router. Here’s what all that tech mumbo-jumbo means: the N66u operates on two different bands, 2.4GHz and 5GHz. We’ve been using 2.4GHz for a long time with 802.11b/g Wi-Fi, which means the spectrum is pretty crowded. 5GHz is faster and less crowded, but doesn’t have the range of 2.4GHz. Each band can simultaneously support up to 450 megabits of data per second, for a total of 900 (though that’s only theoretical, because no router maxes out that capability). Finally, “gigabit” means the Dark Knight has a pretty standard set of gigabit-speed Ethernet ports on its backside, which make wired transfers very fast.

The ASUS RT-N66u is not a cheap router. That’s because it’s really powerful, and most competing routers come in right around the same price. I’ll spell out why the ASUS RT-N66u is an improvement over its predecessor and a smarter buy than other routers around the same cost, but we’re keeping the RT-N56u as a solid mid-range recommendation at its lower price. More on that at the bottom of the post.

In terms of hardware, a few things distinguish the Dark Knight from the older RT-N56u. The router now uses detachable external antennas that can be upgraded down the line. ASUS has also doubled the router’s onboard RAM from 128 MB to 256 MB and its flash storage from 8 MB to 32 MB. Those upgrades help the router remain stable under lots of active connections. Dong Ngo of CNET, one of our favorite router reviewers, reported flawless performance during a 48-hour stress test.

Another benefit of extra flash storage: unlike its predecessor, the RT-N66u supports custom firmware like DD-WRT and Tomato. DD-WRT and Tomato offer advanced functionality, like the ability to tweak a router’s power output and increase antenna signal strength, and make some routers more stable than they are with stock firmware. They also provide tons of tools for monitoring network usage and customizing how your router behaves.

If you’re a power user and want to flash custom firmware, this is a great router to get. Thankfully, the stock ASUS firmware is reliable out of the box: Ngo writes “the RT-N66U’s Web interface is great: well-organized, responsive, and reasonably simple.”

Most importantly, though, the RT-N66u is fast and its Wi-Fi signal stretches up to 300 feet. In the review/benchmark website SmallNetBuilder’s Wi-Fi tests, the Dark Knight is consistently a fast performer. It boasts the highest speed on the 5GHz downlink throughput chart at 66 Mbps, and is a mere 1.2 Mbps slower than the leader on the2.4GHz downlink chart. CNET found that the Dark Knight excelled in the 5GHz band, achieving speeds of up to 180 Mbps and dramatically outperforming other routers at 100 feet.

Our previous pick, the ASUS RT-N56u, was really popular, but the RT-N66u bests it in just about every way. It was the most-viewed write-up on SmallNetBuilder until the N66u came along. Now the N66u owns that top spot and Dong Ngo recommends it over the N56u. He says, “the Asus RT-N66U is my favorite router. This is a great upgrade to the already excellent RT-N56U” in a list of the top 5 wireless routers on the market.

On Amazon, the router has an overwhelming 96 five-star reviews (out of 153) as of this writing. Most of the negative reviews are the result of buggy firmware that shipped with the router. ASUS has since fixed that issue.