How to Mount TV on Lath and Plaster Wall?

First, finding studs on a plaster lath wall can be a nightmare, as the lath tends to confuse the stud finder. You can narrow it down by doing t Save he ‘tap tap tap’ test, but I tend to second and third guess myself when I go that route. I have a Zircon stud finder with a ‘deep scan’ feature that does a pretty good job of finding studs. Unfortunately, it finds lots of other things too. So, assuming your studs are 16 inch on center, measure off an area ~20 inches wide and go back and forth many times, lifting and recalibrating the stud finder each time. You should be able to narrow down an approximate area. 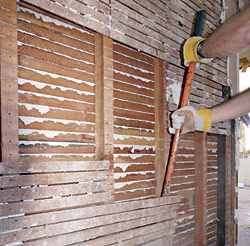 Next, get out a smallish masonry bit and drill a test hole through the plaster. Then switch to a normal drill bit to drill through the lath. You should drill for just a short distance and then hit air, and very likely your drill will crash into the wall and you’ll fall off the ladder. If you keep meeting resistance, you found a stud, hoorah! Now, repeat the same step 3/4″ to the left and right of that hole. If you still find that you’re on the stud, great, your first hole is centered (ish). If one of the new holes didn’t hit stud, you know the opposite one is centered.

Now, measure 16 inches from your ‘good’ hole and drill another hole. If you hit the stud, congrats, you’re doing great. If not, it’s back to the drawing board. Perhaps you don’t have 16 inch on center studs, or perhaps you hit a horizontal beam the first time.

Be careful not to torque the bolts too tight – listen very carefully for sounds of the plaster cracking. This is the second potential pitfall with plaster – being too aggressive with the screwgun can crush the plaster and weaken the overall mount.

Hopefully, you’ve now got a solid, secure mount on your wall. Give it some good horizontal and vertical tugs, listening and watching carefully for any movement or signs of instability. Now, it’s time to hang your QLED OLED TV. Woot!

Mounting Using Elephant Anchors- We use a combination of studs, lath as well as Toggle bolt to make the installation secure when studs and lath are not available. Call us for help.