Most Tv mounts are made for Wood studs and Concrete/brick walls.

95% of TV mounts that are sold on Amazon or Best Buy  are designed for wood stud walls and concrete brick wall. Most sellers on these platforms are traders of mounts and not people who build and test these mounts. They fail to specify which wall the mounts will work on. Instead it is a generic statement that the mount will work on any wall and any TV. Any TV is understandable as there is a standard being followed, however to sell a mount which disregards the location where it is going to be mounted is really bad and dangerous. Lots of customers call us after their TV falls because they used a concrete anchors on their drywall or a concrete wall anchor through their metal studs.

The weight specification on a TV mount only specifies the weight the mount can hold on a concrete or wood stud wall. All the TV mount manufacturers fail to point out that the weight specifications for METAL STUD WALLS. All the TV mount sellers on Amazon are traders that resell goods made in China that are advertised on websites such as Alibaba.com. There are so many TV Mount brands out there who have NO knowledge of how a TV mounts to a wall and what are the different kind of walls.

So, it is crucial that you check whether the TV mount you purchase is suitable for your wall. Mounting a TV on different wall take different mounting anchors  and for Metal stud wall specifically there are special anchors that are required.

We recommend that mounting on Metal studs is done using a Fixed or tilt mounts for any TV. If you really need a swivel mount, do not mount a TV larger then 65″ or 66lbs on a Metal stud wall.

Look out for TV Mounts that specify that Anchors for Metal Studs are included?

A. TYPE of Wall Mount (with arms vs without arms)

In general there are two type of wall mounts, TV mounts with Arms and TV mounts without. TV mount with arms put lots of pressure on your Wall and advice not mounting a TV more then 65″ on a metal stud wall. Mounting a TV without arms like a Tilt or Fixed mount with any size is definitely possible with the right anchors. We use Elephant anchors which are superior toggle bolts that are easy to use on drywall and metal studs. 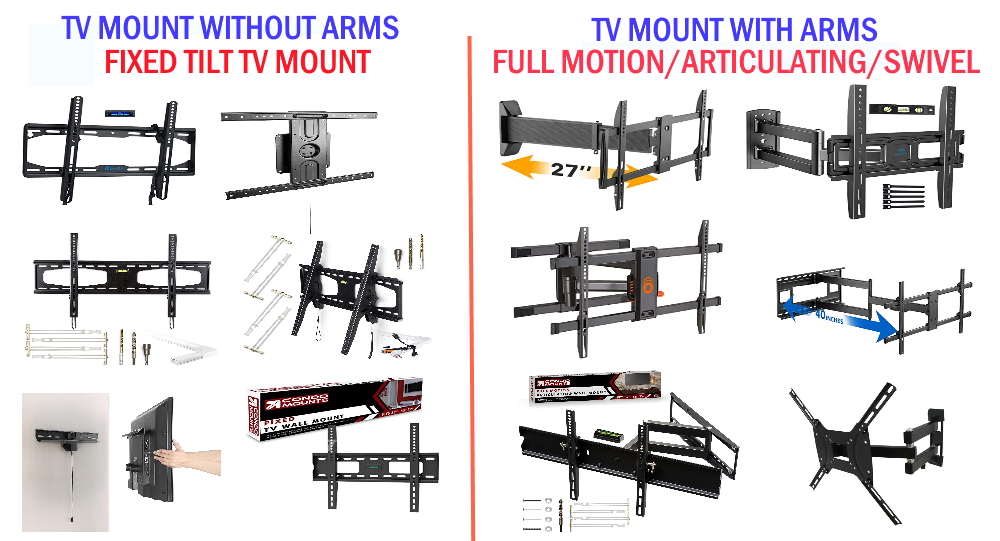 B. MOUTING Points on Wall Mount

Not all mount a made the same. If your mount comes in a small box, means that you probably got a dismantle TV mount which you need to assemble or its single stud v mount. We highly advise against Single Stud TV and disassemble tv mounts as they are not made for TV more then 40 inches.

We would want a find a TV mount that has multiple mounting points to the wall . This will ensure easy and safe installation. Having multiple mounting point on a wall mount allow you to use different anchors to the different points based on the wall the TV is mount. You might sometimes not able to hit a stud where the mounts line up. Please see the diagram below to understand the difference between a single stud mount and a Good TV mount that is secure and safe. 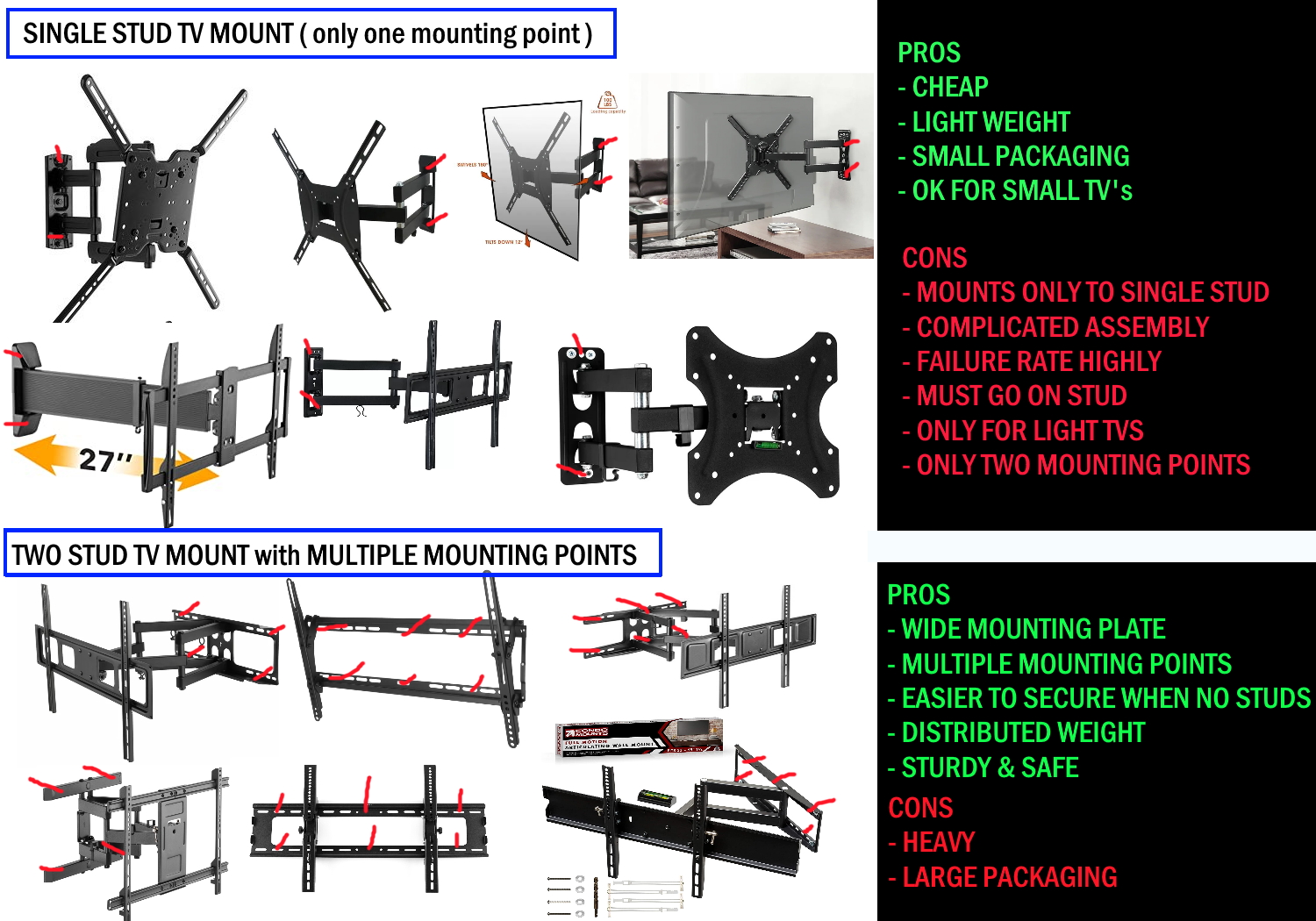 HOW to select a TV mount for your metal stud wall.

C. What ANCHORS TO BE included in a Metal Stud TV Mount?

Mounting TVs on metal studs need to use Elephant anchors or similar heavy duty toggle bolts. Elephant anchors are toggle bolts that are attached with a metal channel that is inserted into drywall or through a metal stud . We suggest to get the Condomounts Mounting Kit. We recommend it because its comes with the drill bit, screws, and washers making your entire project cost less and faster as you will get a set without needed to go the every aisle in your local hardware store. 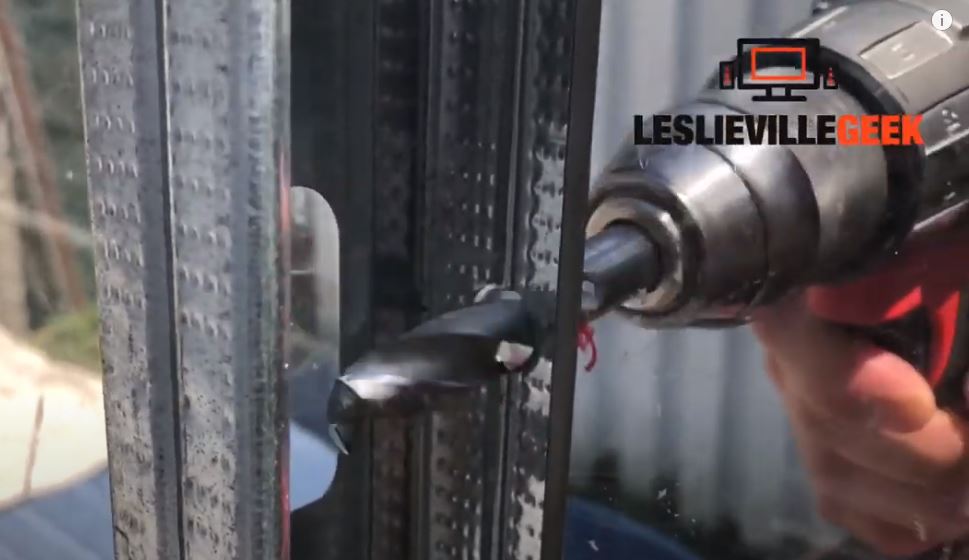 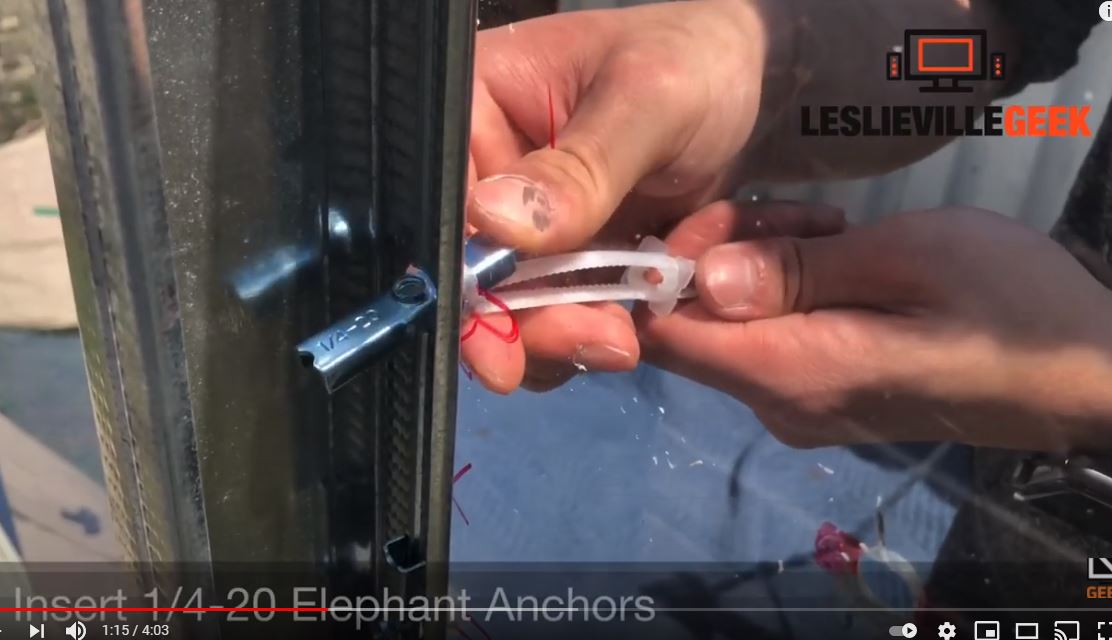 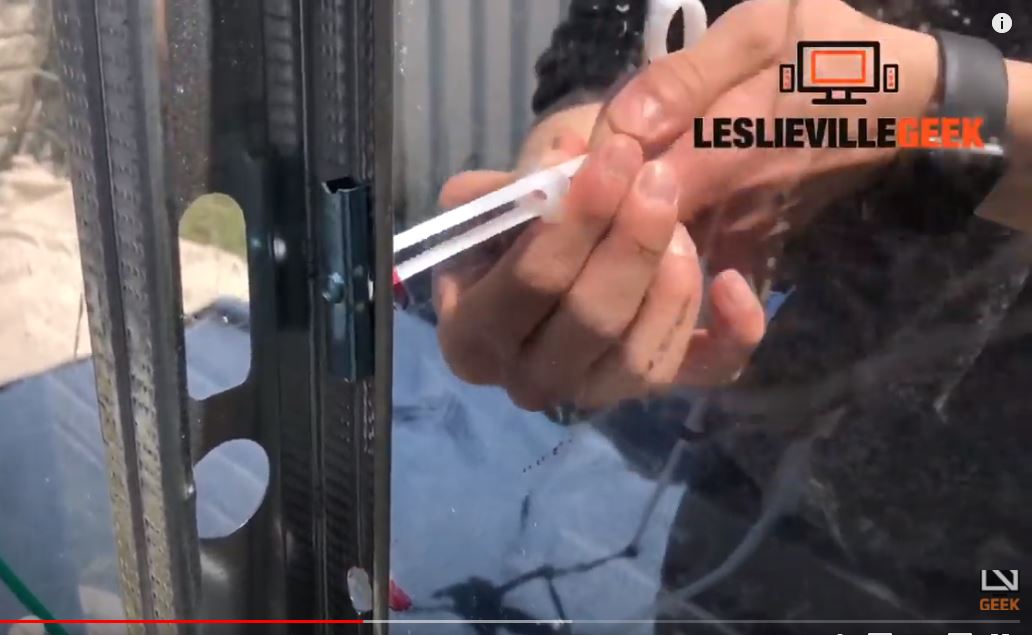 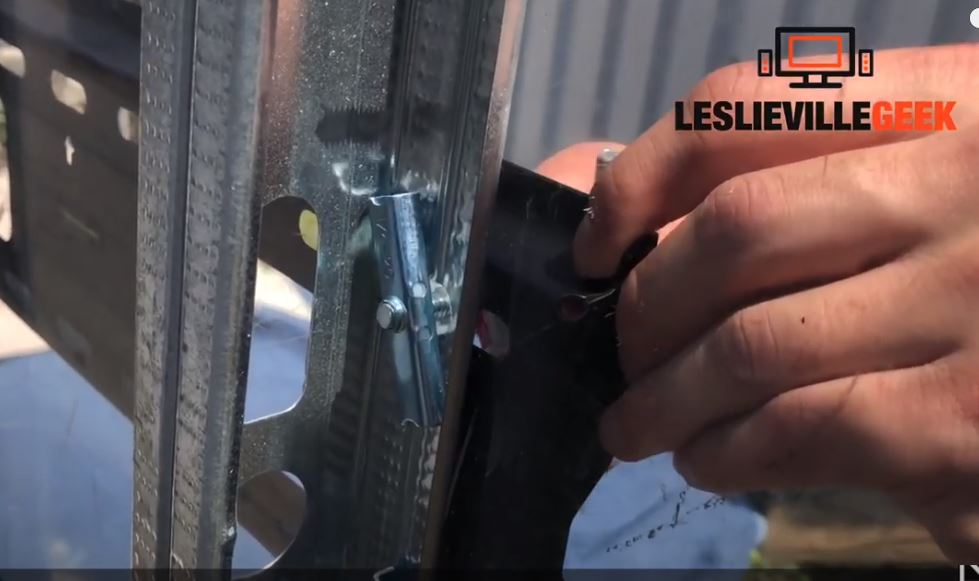 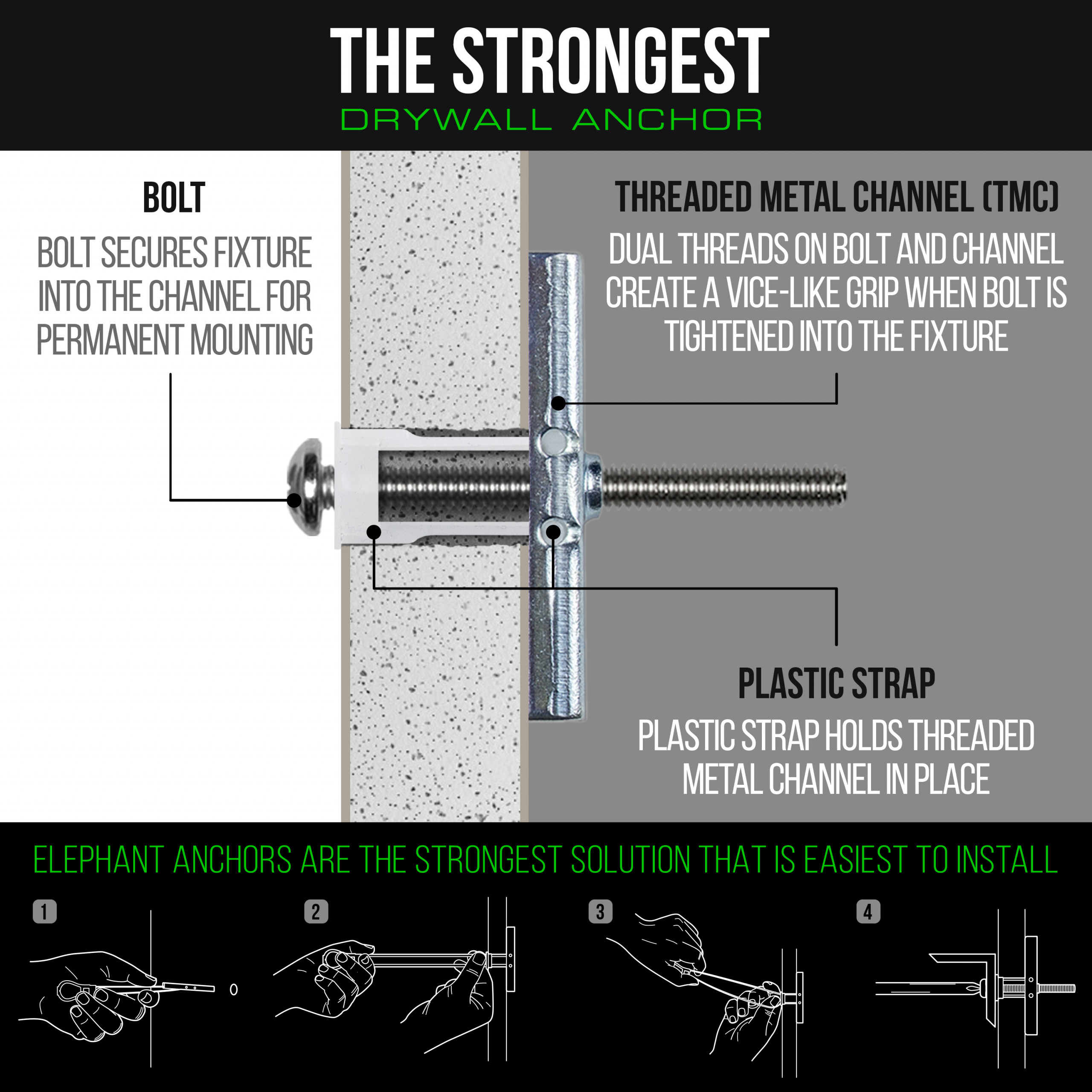